“I was turned down for the Services after being called up for the Services when I was 18 and I was in NAAFI Headquarters as a draughtsman at the time, and the Observer Corps were looking for a blind spot in an area around Chessington, and attached to where NAAFI were evacuated to was a tower called Ruxley Tower near Claygate, and they thought that’s a good idea, and that’s were it all started in the Observer Corps on the llth November 1940, and all sorts of things happened from there on in.” 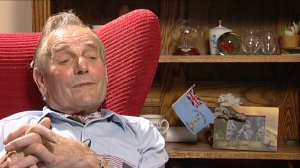 “Aircraft recognition was a essential point. I didn’t know much about it but I had an interest in aircraft and have always done since before the war at Croydon Airport. They accepted me and I was in the Drawing Office, and I helped with aircraft identification we had some silhouettes given us. “Learn these”. And er, you’ll understand how to plot and track aircraft, and er, but the fact of the matter is when you see an aircraft in the air, its totally different to what you see on a sillouette. So I blacked out all the sillouettes completely and 25% of the members of the observer Corps which was around 20 odd, couldn’t identify any of the aircraft cos they couldn’t see the lines of them see what I mean. But, aircraft interested me from, you might say, day one. But they wouldn’t have me in the airforce!” 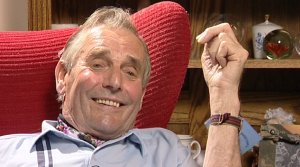 Some of us were very good at identifying aircraft by sound. But if it was seen, it was tracked until we couldn’t see or until we crossed another line of posts which we had on our table. The nearest post to us at the time was X2 which was at New Malden. Vic Posts, there was Vic 3 at Guildford and Vic 2 at Hanwood and Vic 1 was at Headley. That’s how we set up in ours, but it gave us that area between shall we say Kingston and Headley and anything we saw in there we plotted regardless of what it was, it was quite surprising…”

On Sunday morning, on the way to meet Leslie Leney, we visited the plaque on the wall of the pharmacy in Cranbrook. Click here for more information.