“This post is probably better than average. To start with it is dry, which certainly helps. Sometimes you find an inch or two of water on the floor. Sometimes it might be up to the ceiling, or half way up the shaft. It doesn’t help sometimes the posts get vandalised when they’re left, but this one’s not bad. It hasn’t been seriously vandalised in anyway.” 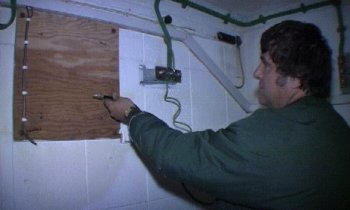 “The posts were normally arranged into clusters of 3 or 4 posts. One post in each cluster was called the master post which meant it had a radio so if the telephone lines went down, it still had communications with headquarters, and this one is a master post and the evidence is here. We’ve still got the cable for the connection to the radio which was probably on a shelf here….”[pointing] 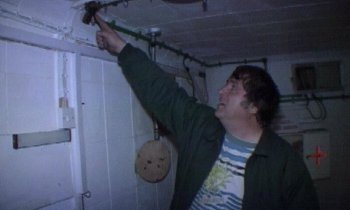 “They had no mains electricity at all, no mains lighting, no equipment that ran off the mains, so they just had a little 12 volt light. Initially it was just that [pointing], just one tiny bulb, but they soon decided that wasn’t quite adequate so they put a small strip light in, but it was still rather dim.”