“I was told I was a centre plotter, what’s a centre plotter, well it’s like a lot of old men playing tiddlywinks on a big table. It was a table, it was roughly square but not completely square because it went in the shape of the Posts, and there were some, many blobs which were Posts all with rings round, I think they were five miles radius and they interlocked on the table, each got numbers on, and the table had got numbers on, and you were allotted three, and I had three Posts from the seat I was sitting at and the man next to me he had three Posts. I could push a switch and take over his three, and push this switch and take over these three, we were continuous, and that’s how it worked!” 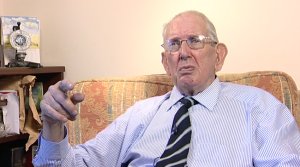 “We were hoping we might curb the bombing I suppose, they told our people that everybody take information from us other Observer branches and the military were told these things, and all the other areas of forces that wanted to know, knew. The ack-ack people knew what was going on, we were telling them that planes were going this way, it was up them whether they used it are not the information was there, as far as I know they were all part and parcel of the same. In our actual sector we didn’t have anybody to direct but it went on the next group up, so they got it.” 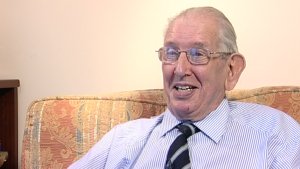