“I was working at a shipyard in Lowestoft having just left school and there were several other youngsters of similar age to myself and we used to meet up in the evenings and discuss recognition because it was a very popular hobby with all youngsters in those days, because it was very necessary anyway to know which aircraft were approaching or overhead and so on!

“So we used to have meetings and learn all about the aircraft silhouettes and the appearance of them and then when it came to reach the age of 17 it was a matter of joining the either the Home Guard, the ROC, the Observer Corps as it was then or the fire service and I elected to join the Observer Corps because of being interested in aircraft and so did must of my colleagues, so 3 or 4 of us all joined at the similar time round about 1942, and we’ve never regretted it really….” 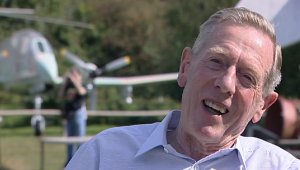 “4 hours goes very quickly when you’re busy, except that its freezing cold and raining of course, but being a coastal Post you see we didn’t used to get any warning of aircraft approaching from the East… I mean, radar… They would come through and say radar has got an X raid an unidentified aircraft approaching from the East, but we would know jolly well that would never approach us from the East because it was practically 15 miles north or south of use, but we still used to look hopefully it would cross the coast where we were and radar was never that accurate in those days….

“I think it did give us some sort of warning that something was out there and happening, but anything approaching us from the West of course which we had our backs to generally, we would get warning of that because we would hear the report procedure going on from the inland Post and we would get plenty of warning of aircraft that were coming especially if the Centre personnel particularly wanted to know about one they were following, a special aircraft that they wanted to know its whereabouts…..

“We spent most of our times staring out to sea, or at night times listening out to sea shall I say listening to what was coming in from the sea, and reporting sound plots.” 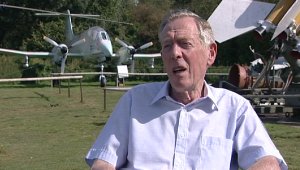 “It was about 12 feet deep and 8, 10 feet wide, and it used to collect a lot of water because it was mostly clay soil, and unfortunately our Post was just outside this tank trap, and we had to cycle through the Army Camp that our Post was situated in, cycle through the Camp cross a very narrow path over the anti-tank trap to reach our Post, and in the pitch black of night it was a little bit difficult to always find this path, pitch dark in those days was really pitch dark no street lights, no car lights, you cycle lights were one inch diameter, and not allowed to have any sort of a beam…

“So I was cycling to go on duty at 8 at night pitch dark, colleague beside me and I was talking to him and he was talking to me and all of a sudden it went bit quiet he wasn’t there and there was a bit of a crash and a splash and of course he’d disappeared down the tank ditch, and he got rather wet because of the water that had accumulated in the bottom of the ditch…. But we managed to haul him and his cycle but he did spend the next 4 hours in rather wet uniform because he still did his 4 hours duty, and he did it in fairly good humour as well, um so yes he was rather damp Observer that particular 4 hours….!” 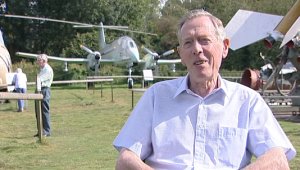