“I think like every other young person I wanted to join the Services and I wanted to be in a uniform and feel that I was that I doing my part for the country, and particularly I was interested in the Women’s Auxiliary Airforce, but you had to be 18 to do that, so when I saw an advert in the local shop window it was an estate agents, so there was this huge advertisement, join the Royal Observer Corps and live at home, and you only had to be 17 and my seventeenth birthday was coming up so I thought that’s for me and the uniform was the same colour as the Womans Auxiliary Airforce and same style and everything I just thought this is what I need to do, so I went along and joined actually on my seventeenth birthday. It did take an agonizing 10 days for it to be formalised but I did actually start on my birthday.” 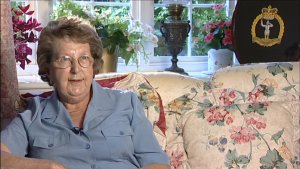 “Well as a Plotter you were bound to record the information that the Post gave you on aircraft, you were also expected to give the Post Observers warning of anything that was likely to come towards them so they could be ready if you like to pick up that track, and some aircraft were more important than others, if for instance we knew that there was a hostile approaching the Post that was the first thing we would advise them about so they were prepared and ready.

“Apart from that Plotting on the Main Table, that displayed what was happening within your own group, there was a big long range board which gave us information of what was coming towards us from other Groups all around us, and I used to do that as well in my early years. You were expected to watch that Board and if anything was approaching your part of your local table then you would have to advise the Post Observers.

“The designation on these plaques would be such that you would know whether it was important or not, because if it was an important raid then it would have a red prefix letter, as opposed to an black one, and if it was hostile it was yellow black, you had to learn these little things so you were aware of them. some people felt it was a progression in this life if you like to go upstairs on the balcony and be a Teller. Certainly it was an important role… “

“There were certain situations within the Operations Rooms that were clearly much more vivid than any others. It didn’t ever occur to you that you might be in danger you simply wanted to make sure that you didn’t miss doing what you were supposed to do and getting the Plots down.

“An incident that comes to mind probably is the huge display of aircraft and gliders that were going out one Sunday morning. I can remember that so vividly and we thought what on earth were all these aircraft doing? We later learned that they had been the D-Day Landings, the landings in Arnhem.

“Now, when you plot I expect some people knew what it was, but certainly we didn’t, all we knew was that we were having a huge amount of flying across the Group, with all these Dakotas and gliders, and Halifaxs, all taking these airborne troops to Arnhem, didn’t know that until much later on when we read it in the papers.” 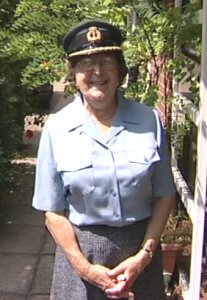