“From 1942 to 1945 I was in the Observer Corps, I was in the Operations Room, the Truro Operations Centre, the entrance to which was just behind where I am sitting now. It was in the evenings, weekends, and nights in addition to my ordinary work you see, not every night of course but quite frequently, about roughly once a week, and weekends were quite frequent. When we were concentrating on our work we are not thinking of what is actually going on not a question of being brave or anything like that but you are concentrating on the work. On one occasion I thought back afterwards it was rather amusing I was plotting a German plane going over Truro, but I mean there wasn’t any question of feeling frightened or anything because I was concentrating on the work, and after that I thought ups he might have dropped a bomb!” 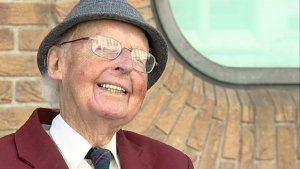 “Well of course we were nearest to Plymouth and I actually did on 2 nights see from Truro the flames at Plymouth which is 50 miles away, I mean it would be a glow which would a glow in the sky which would increase every now and again you see. Of course nearly every place in Cornwall did have few bombs but Falmouth more than any other, and as I say there was Plymouth of course…”

“The worst raid on Truro was during the Summer I think it was 1942. I was not on duty at the time but bombs were dropped at the hospital and there was quite a lot of damage done to the hospital. Then there was a fatality at the railway station and then there was also a fatality in Agar Road in Truro. That it was thought that bomb ricocheted I mean there’s nothing in Agar Road that they were aiming for, obviously the hospital, incidentally I heard the Germans radio, I used to listen to the German radio in English and they said that they described the raid as being on a factory.” 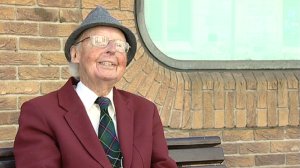