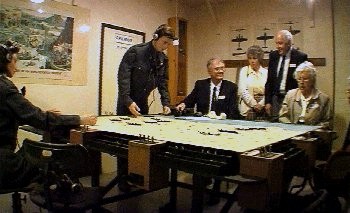 The World War II control room was recreated from information and artifacts from the Horsham HQ, photographs from a book of Watford Group during the war and of course the memories of the members of the team who served with the ROC between 1939 and 1945.

During the Open Day, plots were passed from the Orlit Post (standing in for a wartime observation post), via a communications system specially set up for the day, to the control room, and then plotted on the map.

It is thought that this had not been done since the end of World War II.