“I have been interested in aircraft I suppose since um 1941 because that was when the local airfields in West Cornwall were built, there was very little air activity around this part of Cornwall prior to that, but 2 airfields were built, one at Portreath on the North Coast, to the North of Camborne, and one at Predannack between Helston and the Lizard, and that brought about a lot more air activity so I became interested in aircraft in general, as air activity increased so my interest increased I suppose.” 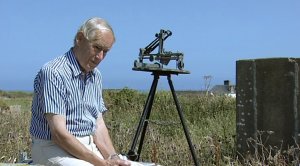 “I don’t think I was the Head Observer’s favourite person somehow, but I hadn’t been there too long when I managed to sit on the glass wind shield and broke it, and this produced from the Head Observer the first comment I heard concerning me when he said “James is a bloody nuisance”, so obviously he wasn’t pleased!”

“There were the 5 full timers, and they put in 48 hours a week, one of whom was the Head Observer so he actually put in 32 hours duty on the Post and 16 hours doing admin. Thinking of the other Post personnel, 2 or 3 were employed by the Civil Construction Company John Laing, who were at that time building the new naval airfield at Culdrose just outside Helston.

“There was the bakers’ roundsman who had been partially responsible for me joining in the first place, there was a local butcher who was also a small holder, 2 of the others were mechanics who worked with the local bus company the Western National, who else was there, um let me think I was a farmer’s son, and was therefore able to go on at various different times of day, um I can’t think of any other, yes, yes of course the Leading Observer, the Post Instructor he had a fish and chip shop, so on Saturday evenings the colleague who was coming on to join me at 8 o’clock used to bring fish and chips to the Post, so that was good!”